I’m back, checkin’ up and checkin’ in on who’s loving you.  The answer to that question lies in the mirror but we’ll get to that in a moment. 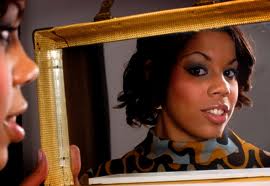 A recent discussion ensued between me and a few girlfriends; most who are in staled relationships or pining away for old beaus.  I tried my best to be empathetic, to listen and minimize the advice.  I say minimize the advice because most women know what they want to or should do and are not excited about unsolicited advice.


One friend talked about how months before she and her beau of ten plus years were doing so well.  They had broken up and reconciled on the strength of moving the relationship forward—marriage.  After all, she mothers his child as much as the biological mother.  She’s all but set up house with him when she’s not in her own place several states away and does ALL of the wifely duties including cooking and cleaning with only a promise of the brass ring to come, someday.  When you enter his house, it is certainly his.  There isn’t a blemish or wrinkle of her presence other than her suitcase which sits in the far corner of his bedroom.  Her Christmas gift last year, her very own key to his front door—a last.


Supposedly they were on the fast track, again—ten years later—to the altar until he recently advised her that she wasn’t doing enough.  She’s at an age—late twenties—where he expected her financial and professional status to be escalated.  I personally think he’s watching too much television. I don’t know many women who owned property at age twenty-three and a thriving self-employed business.


Her current profession requires extensive travel.  She scours the world for treasures for her clients and if she doesn’t travel she doesn’t get paid.  If she doesn’t get paid, she doesn’t eat and her bills…you know the rest.  God forbid he should ever offer to help out, even with a light bill.  She struggles with a severe medical issue but manages to make her money, pay her bills, care for her pseudo family and herself.  However somehow she isn’t doing enough.  Really?  And to make matters worse, he’s asked her to minimize her work schedule to accommodate additional care for his child on the weekend. He wouldn’t dare make up her difference in pay.  Really?


What’s wrong with this picture here?  Actually nothing is wrong with this picture for him.  He has more than his cake, he owns the entire bakery and he’s savoring every morsel of every cupcake.  He’s not going to buy the milk because the cash cow continues to be more than free; he enjoys free babysitting, maid and escort services.  He will continue to do what he’s always done, and she will continue to be inadequate, not enough.


If you are just a wee bit soured by the preceding facts, here’s one more.  She’s opening a boutique in order to stabilize herself and not to have to travel so much and guess what? What? He secured the space for her, in his name and he wants her to use his corporate identification.  His business will be the parent company to her brilliant idea.  All the while he continues to remind her that she’s not enough.  Again, what is wrong with this picture here?


She’s heard it all before.  She’s read The Book, watched the movie and sought and received counsel from family and friends.  It’s exhausting and while she’s free to choose the life she’s living, friends won’t live it with her.  I still can’t help but ask, what makes an intelligent, beautiful, witty, vivacious woman melt into a pool of mud and turn to men who avow not to love them?


Ding, Ding, Ding….WORTHINESS! I’m no relationship or love expert but I do recognize when I relegate me to a doormat. However, I’ve learned how to harness love and re-focus it above and to the mirror, in that order.  One has to feast on a steady diet of love and worthiness.  [Man] doesn’t live on bread alone and shouldn’t attempt to exist without self-love and worthiness.


I can say for certain is that when one gets her own worth, the supernova of peace and choice is unleashed and cannot be contained.  A woman who knows, believes deep down in her heart that she is worthy of greatness looms an unrivaled presence.  A worthy woman who truly loves herself cannot help but be properly loved in return, if one is privileged to be invited and take residence in her space.  A worthy woman doesn’t ask the question Who’s Lovin’ You.   A Worthy woman is the answer.

Email ThisBlogThis!Share to TwitterShare to FacebookShare to Pinterest
Labels: A Woman's Worth, advice, girlfriends, Love, Self Esteem, Worthiness

Checkin' Up & Checkin' In With Toni Staton Harris
Los Angeles, California, United States
Thank you for taking the time to visit my blog. Toni Staton Harris is a Contemporary Ficton Author who enjoys exchanging information about what matters to you and how life-style, hot topics and current events affect our lives. It's a conversation, a sharing and exchanging of information. I'll check up on you and check in on what's going on with me and if you are willing, maybe we'll share a glass of wine.